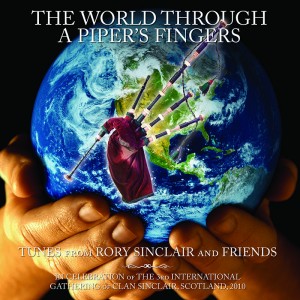 What follows is the tally so far …

1. Lost on the Bayou (Bill Bourne & Alan MacLeod)
This Cajun tune for pipes and guitar was composed by the fabulous duo Bourne and MacLeod of early ’90s fame. When I heard it first in 1990, I have to say that it took me by storm, well before I had even taken up my pipes again.
Performers: Highland pipes & vocals: Rory Sinclair; harmony vocals: Gaye Zimmerman-Huycke & Wayne Neon; fiddle: Brian Morgan; guitar: Barry Pausey; bass: Bert Clarke; Mandolin: Jonathan Rudin; percussion: Terry Campbell & Wayne Neon

2. Waly Waly & The Kilworth Hills (Trad & G.S. McLennan)
The first is an ancient Scottish melody that has its own words but newer lyrics – The Water is Wide – came into the canon in the last century. The Kilworth Hills was composed by the piping genius G.S. MacLennan during his stay on duty with his regiment in Ireland in the 1920s. The harmonies, three parts for Waly and two parts for Kilworth, were composed by Rory.
Performers: Highland pipes & harmonies: Rory Sinclair; bass: Bert Clarke; flute: Wayne Neon; guitar: Barry Pausey; drums: Terry Campbell

4. Hector the Hero (J. Scott Skinner)
This was originally a fiddle tune composed by the legendary J. Scott Skinner of Aberdeen. But since then, pipers have taken it on and over. Here we have small pipes, fiddle and flute carrying the tune and delicious harmonies at the end composed by Joe Rennix.
Performers: smallpipes, melody & harmony: Rory Sinclair; fiddle: Brian Morgan; flute: Wayne Neon; guitar: Barry Pausey; bass: Bert Clarke

5. Calypso Piper (P/M Robert Mathieson)
For me, this is a break-out tune. It so completely captures the Trinidadian Calypso idiom and took my breath away when I first heard it. Andy, one of the finest steel pan players in the universe joins us for this tune. Pipe harmonies composed by Rory.
Performers: Highland pipes & Deger pipe: Rory Sinclair; steel pan: Andy Phillips; ukulele: Dean Cavill; guitar: Barry Pausey; bass: Bert Clarke; flute and sax: Wayne Neon; drums: Terry Campbell

7. Highland Cathedral (Korb & Roever)
A tune, written in the ’80s, by two Germans in complete respect for the culture that emanates from Scotland. This version appeared originally on the 2007 Xmas CD of Metropolitan United Church in Toronto and appears here by kind permission of same.
Performers: Highland pipes: Rory Sinclair; the big organ: Dr. Patricia Wright

9. Andrew MacNeill of Colonsay, Piobaireachd (William Barrie)
Piobaireachd is the classical form of Scottish pipe music and the tradition goes back to the 15th century. This is a modern piobaireachd composed by Willie Barrie in the early ’90s for his friend and fellow piper Andrew MacNeill. The melodic line is to die for. I must have listened to Willie sing it 1000 times on a tape before I tackled it. Here is the ground of the tune, the main theme. The full tune continues on for another 15 minutes. Piobaireachd has a rhythmic scheme but it cannot be called a tempo and can be hard to follow for other players. I have taken the liberty of playing all the accompanying instrumentation.
Performers: Highland pipes, guitar & bass: Rory Sinclair

11. Smallpipe Set (Rory Sinclair)
Three tunes composed by Rory and performed by him on the lowland Scottish smallpipes, using three chanters in three different keys. The instrument was made for him by Julian Goodacre of Peebles Scotland. Moonlight on Birch Island, for dear friends Biff and Sue Matthews for their hospitality at their cottage on Georgian Bay; Lady Iona Sinclair, for the 30th birthday of the daughter of Malcolm Caithness, Chief of Clan Sinclair; and The Untitled Waltz – there is a great story behind the title … email me for details.
Performers: smallpipes in G, A and D: Rory Sinclair

This kind of project is necessarily the notion/vision – probably a compulsive one at that – of one individual. The trick is to bring others into that compulsive vision without making them feel as nutty as the perpetrator.

I have been blessed with wonderful musical partners both in the work that is in your hands and in my life in general. The collectivity that is Gordon’s Acoustic Living Room is just such a blessing. Wonderful players and wonderful people to boot – they all have contributed here. Soooo …

To Dean, Gaye, Barry, Jonathan, Gordon, Wayne, Bert, Terry – I cannot thank you enough for sharing your talent and good spirit to complete the project.

To Andy Phillips – the best Pan Player ever, to Wayne Cass – massive guitar talent – to Brian Morgan for the exquisite fiddle work, and to Dave Hamilton – a great guitar player in his own right, I say a great big thank you. You all added special colour to this album.

To Pipe Major John MacKenzie, my piping teacher for nearly 20 years, for his eternal patience with my fumbling fingers and in supporting crazy notions of where piping can go outside the box.

To Mary Newberry, my life partner, best friend and love of my life – the person who has been ever encouraging in indulging me in this musical obsession. This would not have happened without your love and support.

To John Marc Hamilton – a true treasure of a man whose talent for recording I discovered by accident – for doing all that was necessary from the original recording, to the mixing and mastering of the final product – your consummate skill coupled with your cheerful ‘can-do’ manner makes you a winner anywhere, anytime.

And finally – this CD originally had its genesis as a project to bring along to the 2010 edition of the International Gathering of Clan Sinclair held every 5 years in Scotland. This Herculean logistical task has been organized each time by our Chief, Malcolm Caithness, whom I have come to know as a friend and ‘brother’ over the last 15 years. Malcolm has taught me much about what Hemingway referred to as ‘grace under pressure’ for he has had triumph and tragedy in equal measure in his life. He has not let the triumph turn his head but neither has he let adversity beat him down. To honour the man, I dedicate this musical project to him: The Right Honourable Malcolm Sinclair, Earl of Caithness and Hereditary Chief of Clan Sinclair. Dear brother, this one is for you.